Discussion What is more important in a Mario platformer: level design or 'soul'?

This is an interesting question, and one that has a lot of layers to it.

I think if I had to choose, I'm on the line of tight level design. But it's not as straightforward as that. For example, let's look at Galaxy 1 vs Galaxy 2, a great example of the "level design vs soul" debate. Galaxy 1 creates a vast, mysterious, and often melancholy atmosphere through its music and environments, and the character of Rosalina became a fan favorite in large part thanks to her backstory. From the intro to the ending, Galaxy 1 succeeds in being grand and epic. Galaxy 2 famously deemphasizes these aspects, removing most of the storytelling and going for a more familiar, Mario style atmosphere. Detractors of Galaxy 2 point these out as negatives against the game while its proponents focus on the qualities of the level design. And the argument for the level design is a cogent one. Galaxy 1 is a fantastic first play, but upon replay the game's higher focus on simplicity combined with its sluggish and more restrictive movement compared to 64 and Sunshine really show. Meanwhile, Galaxy 2 is a more focused game, refining mechanics from the first game and presenting them in novel contexts while also introducing many of its own ideas. That being said, while the atmosphere is different in Galaxy 2, I also wouldn't say it lacks "soul." As mentioned before, Galaxy 2 adds plenty of its own mechanics to make the game stand out, and it's presentation is on the same high quality as the first. The sunny skies and bombastic music give the game a familiar yet confident feel, which I feel reflects the experience of many players - any player who played Galaxy 1 should be familiar with the mechanics and have some form of mastery of them. You're not exploring a totally new world here, you're returning to one, a more skilled and more confident adventurer. It's the combination of level design and the game's "soul" that makes Galaxy 2 one of my favorite Mario games, more so that the also great first game.

All that being said, the term "soul" is really nonspecific. I feel like what is being described with NSMB and a lot of the later Wii/Wii U era Mario titles is that to detractors they are, in comparison to other games in the series, stale and derivative. Perfectly functional games that don't "push" the franchise in new directions, are too close in style and execution to previous games in the series, and lack that key buzzword: "ambition". Couple that with New Super Mario Bros. effectively becoming the Mario brand in general and the fact that NSMB2 and NSMBU were very similar games releasing only months apart, and I can see why, regardless of any level design praise, people find them by the numbers. I suppose we would also have to determine how we are judging "level design" as a quality - is it in how it introduces mechanics? How it hides secrets? How levels are presented? The flow of levels? But that's a topic for another thread.

I'm very interested in the Splatoon points brought up. Splatoon is a game where the central mechanic came first. From there, the style of the game was built with that in mind. But like @Raccoon said, it's a synthesis of gameplay and presentation, all different pillars supporting one another to form the core of Splatoon. "Gameplay first" does not inherently mean ignoring world or story or character. Heck, a gameplay concept to start doesn't necessarily need to be a specific mechanic. It can be something you want to do, or a mood you want to set, or a feeling you want a player to experience, or a way you want players to enjoy a concept. I don't think things are as simple as "gameplay above all" or similar terms.

If we have to single Miyamoto out and his design philosophies, though, I'd say play is a big focus of it. Just look at the Nintendo theme park he spearheaded. Beyond the rides, the whole place is stuffed with interactive play elements. It's not strictly "game" play, but as a toymaker I bet Miyamoto wants people to play.
Last edited: May 12, 2022

Soul is such a vague quality that could mean a bunch of different things so I’m gonna say level design is more important.

VolcanicDynamo said:
"Gameplay first" does not inherently mean ignoring world or story or character. Heck, a gameplay concept to start doesn't necessarily need to be a specific mechanic. It can be something you want to do, or a mood you want to set, or a feeling you want a player to experience, or a way you want players to enjoy a concept. I don't think things are as simple as "gameplay above all" or similar terms.
Click to expand...

Splatoon is a perfect example of how a gameplay first philosophy can inform all other aspects of a game. Once the devs got the core mechanics down pat, they decided to go with squid characters to better convey the movement through the ink. They then decided to adopt a street punk aesthetic because the spraying action reminded them of graffiti. Even the music was based around the colorful ink mechanics.

Nintendo has always been fantastic at marrying form and function.

I mean... both? Though I'm more likely to give a game a try if I like the style, so I guess "soul" edges out

Vibe is absolutely a vital part of games, and something whose importance can not be understated. In the end, though, I think what makes games games - Mario games especially - is the emotional and cognitive resonance that occurs in the player's brain and heart caused by the performed actions in the game and the relationship between controller input and sensory output. This feeling is I think what truly makes games unique among other artforms. And in platforming, few things are as big keys to making actions and interactions in the game feel resonant and satisfying than the design of the levels.

(NSMBU rules, by the way)

Both. You can't have The Soul without level design, then it's just a bad Newgrounds platformer that spent too much thinking about its own style.
Otherwise you get boring trash. Like, imagine a tightly designed cool game that's all sewer level.

I'd argue that, screw you for even implying that, SM3DW totally has a soul. Sure, it looks a bit Minecrafty, but that's how they were able to cram so many levels into it. I'm guessing designing them that way was easier. It helps that that game had some cool themes and a kickass OST to boot.

NSMB definitely wore off its welcome, however. I feel like I'd be inclined to replay them way more often if they didn't follow Mario 3 pattern for every theme and if the music was more varied.

I’d say all of the Mario platformers have good-to-great-to-incredible level design and always soul. You want an actual example of a couple of games that have no soul? Nickelodeon Kart Racers and Nickelodeon All-Star Brawl. They play decent enough, but the lack of voices for those iconic characters completely drains the experience and that’s disheartening. I just bought Kart Racers this past weekend and despite enjoying the few races I did, I’d say ‘souless’ is definitely an appropriate term for what the game is missing.
V

No 3D Platformer before it had better controls. It was only topped by Odyssey since.

Level design easily. Odyssey is way more focused on instant gratification and copy & pasting the same 6-8 filler moons every kingdom than actually focusing on platforming, and the few platforming sections in those sub areas are so basic and one-note that the feel like they were made in a 3D version of Mario Maker. All the “soul” for that game went into how it looked, the priority was way more leaning to making sure all the kiddos didn’t get bored by spreading moons every 2 feet for them to collect. Which is fine but they don’t feel as rewarding to grab when they’re literally everywhere and ask so little of the player to collect.

Contrast that to something like 3D World where, even if the game is easy, it’s still an obstacle course you’re running through that tests your platforming ability, so the rewards like the flagpole, stars, and stamps actually feel earned. Coupled that with top tier level design and you have a fantastic game. And that OST has “soul” in spades. That’s my take at least.
What is soul? New
OP
OP 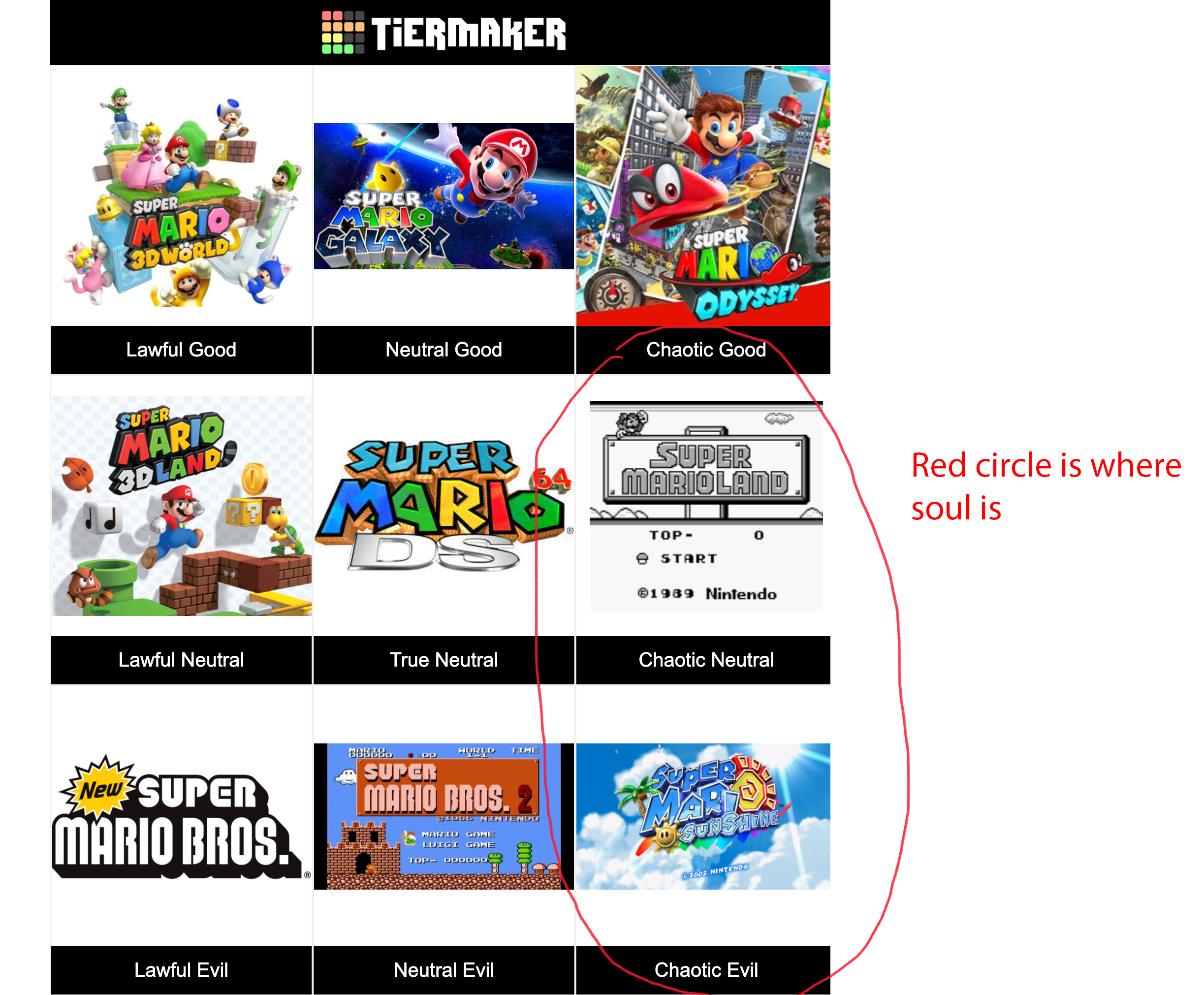 Maybe this will help illustrate what I mean by 'soul'

Maybe this will help illustrate what I mean by 'soul'
Click to expand...

So is our definition of "soul" is something along the lines of "creative world[building] and unique presentation, even if the game has mechanical and/or structural imperfections"?

If that's the case, I still don't think that "soul" and other factors like level design, game structure, and mechanics need to be diametrically opposed. It still requires a good balance. Like for example, I'll always take Super Mario Bros. over Super Mario Land. Land may have some really creative world ideas and presentation, but Mario 1 feels way better to play and I enjoy its level design a lot more. But does Mario 1 lack "soul"? I wouldn't say that.

Let me put it this way, I guess. Say Nintendo develops a Mario Sunshine 2. Unless it is also rushed and/or copies every single issue wholesale (which, given Odyssey and Bowser's Fury seems unlikely?), then it has the "soul" and the mechanics down just fine.

Or alternatively, if we had a 2D Mario that played near identically to the New Super Mario Bros. but had more "unique" presentation elements, more new enemies, maybe one new central mechanic. Nobody would be saying the games are soulless. Just look at Kirby. Planet Robobot is nigh identical to Triple Deluxe in structure and focus - same number of levels, collectibles are structured in and are used in almost the same way, even the side content shows lots of parallels. A change in aestheric focus and a great new one game mechanic replacing Triple Deluxe's one game mechanic took a game most fans liked to a game considered one of Kirby's best.

Speaking as a game design and a level designer. You need both. It's a balance that's required to make a platformer game memorable.

You can make a really well designed level that lacks flavor but would it be that memorable? I would be like "Well, I had fun but it just... existed?". The NSMB games after DS for the most part, feel too safe and lacking in flavor (or rather, its all sterile) where I have trouble feeling that much fondness for them. Yeah sure I had fun, they work, the level design is well done, but it was like eating basic cake that doesn't even look appealing.

I'm not asking for like a grand story (if anything shoving story forcefully in a normal Mario game would be a bit of a detriment) or be like "AAA AMAZING 10/10", The game just at least needs a lot of life to itself, and personality. 3D World felt like it had so much charm put into it despite being "safe" relative to Galaxy and Odyssey. It also helps 3D World explored themes a bunch. We got a carnival world for bowser, a savanna desert, the beep blocks levels, etc. on top of having a wonderfully made soundtrack all around.