A fan translation for Nakayama Miho no Tokimeki High School has just been released! 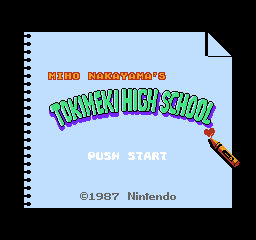 This is a complete English translation patch for Idol Hotline: Nakayama Miho no Tokimeki High School

This is one of the very first dating sims ever, and on top of that, it was made by Nintendo's Yoshio Sakamoto with Square's Hironobu Sakaguchi! It also lets the player literally phones Miho Nakayama (well, a recorded voice of Nakayama), who was a young celebrity at the time. Not sure how this was done in the fan translation. If you want to know more about this game, you should read Iwata, Sakamoto and Sakaguchi chatting about it here. Sakamoto approached the game as an adventure game right before developing the first Famicom Detective Club, so, in a way, it's a sort of "episode 0" of the Detective Club series.

Welcome to the True Bean's World

Wow, this is amazing news! I never thought I'd be able to play this one in English. It's a really important game in Nintendo's history, so it's great that more people are going to be able to try it out!